History of Will Rogers Club Rotary

The first club meeting was November 20, 1950 with member Paul McBride, minister of East Side Christian Church speaking on “Our Thanksgiving Heritage.” About this time, it became necessary to change the club name from Eastulsa Rotary Club to its present name, “Rotary Club of Will Rogers, Tulsa.” Contrary to popular belief, the name was not selected to honor the famous Oklahoma humorist but to identify the area the club served, i.e., the neighborhood surrounding Will Rogers High School. Nevertheless, Will Rogers has the distinction of being the only Rotary club in the world which bears the name of an individual, albeit indirectly.

A Red Letter Day was January 17, 1951 when the charter was issued admitting Will Rogers Club No. 7672 into Rotary International. President Parker held several indoctrination meetings so that when the charter banquet was held on March 8, 1951 at the Boston Avenue Methodist Church, our charter was received by thirty-nine informed charter Rotarians who, along with their wives, were all present that night. Also in attendance were Rotarians from Sand Springs, Sapulpa Drumright, Wagoner, McAlester, Durant, Okmulgee, Bartlesville, Skiatook, Claremore, Henryetta and the Tulsa Rotary Club. Since that day in 1951 when the Rotary Club of Tulsa made our Will Rogers Club possible, five other Rotary club have been formed in Tulsa, with assistance from our club, making it convenient to make up attendance any day of the week.

Many fine and lasting traditions were started that first year. Our first Ladies Day was February 14, 1951. Our officers attended their first District Conference in Coffeyville, Kansas on April 22 and 23, 1951. Our first new members, WaIt Kelly, Sr., George Knapp and Ernest Moody, were inducted May 14, 1951. The first issue of our club bulletin, “The Round-Up,” was published August 27, 1951. And about this time member Jimmie Jones offered the club a large number of miniature replicas of the branding iron used on Will Rogers’ ranch near Oologah. This became the unique memento we present each week to the Rotarian traveling the greatest distance to make up at our club. Somehow over the years the die used to make the branding irons was misplaced, but Lloyd Stephens came to the rescue personally paying $500 to have a new one made so that we could continue this tradition. And our rust bowling team entered the league.

A History of Service

The motto of Rotary is “Service Above Self” and from its very inception the Rotary Club of Will Rogers has sought to practice this precept. Jack Powell our President in 1983-84, stated it very aptly when he said, “Will Rogers is a service organization. Service is the reason for our existence. But service, as we all know, is no better than the quality of men (and women) behind it.” It would be impossible to recount the hundreds of service projects, the thousands of hours devoted to them and the many thousands of dollars given by Will Rogers Rotarians over the more than forty years since this club’s founding. But a history of Will Rogers Rotary would be but a shell without at least some mention of a few of the noteworthy efforts of this club.

Another traditional Will Roger project began in 1954 when our members teamed with the Tulsa Rotary Club to ring the bell for the Salvation Army one day before Christmas. In 1955, we collected more money for the needy than any other service club, a feat which we’ve repeated many times since. 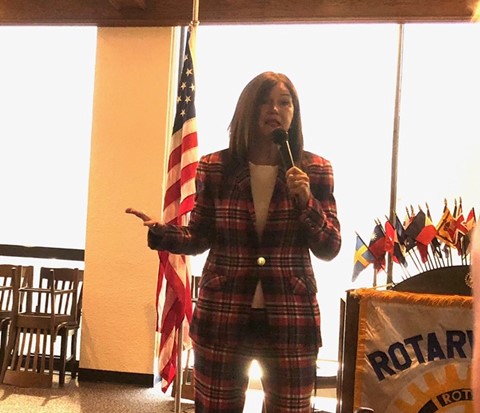